Forgotten Africa: An Introduction to its Archaeology


Passionate arguments about the hunter-gatherer way of life have centred on Southern African cases, and the relationship between archaeological and anthropological data is also central to understanding the past of Southern Africa's pastoralist and farmer communities. The pre-colonial states of the region provide some of the best documented cases of the influence of external trade on the development of African polities.

This book is a comprehensive modern synthesis of the sub-continent's archaeology.

Main publications since retiring in 1995 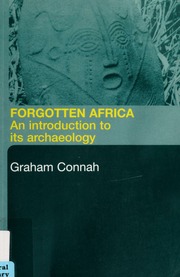 Andrew M. Traditionally, Historical Archaeology has had a North American or European stance, focusing on the interplay between historical documents and the archaeological record.

For Africa, with its non-traditional historical sources, this interplay is not as applicable. These sources also inform the period of contact with Europeans, during which the shape of the modern continent was inexorably defined. By focusing on such sources, it becomes possible to present historical understandings which access African experiences with outsiders and other African populations.

Forgotten Africa: An Introduction to Its Archaeology

The Archaeology and Ethnography of Central Africa. James Denbow. The Archaeology and Ethnography of Central Africa provides the first detailed description of the prehistory of the Loango coast of west-central Africa over the course of more than years. The archaeological data presented in this volume comes from a pivotal area through which, as linguistic and historical reconstructions have long indicated, Bantu-speaking peoples expanded before reaching eastern and southern Africa.

Despite its historical importance, the prehistory of the Atlantic coastal regions of west-central Africa has until now remained almost unknown. James Denbow offers an imaginative approach to this subject, integrating the scientific side of fieldwork with the interplay of history, ethnography, politics, economics, and personalities. The resulting 'anthropology of archaeology' highlights the connections between past and present, change and modernity, in one of the most inaccessible and poorly known regions of west-central and southern Africa.

Ann Brower Stahl. Drawing on evidence from several disciplines, Ann Brower Stahl reconstructs the daily lives of Banda villagers of west central Ghana, from the time that they were drawn into the Niger trade around AD until British overrule was established early in the twentieth century. The case study aims to closely integrate perspectives drawn from archaeology, history and anthropology in African studies.

This volume investigates the material production and expression of colonial experiences in Africa. It combines archaeological, historical, and ethnographic sources to explore the diverse pathways, practices, and projects constructed by Africans in their engagement with the forces of colonial modernity and capitalism. This volume is situated in ongoing debates in archaeological and anthropological approaches to materiality. In this respect, it seeks to target archaeologists interested in the conceptual issues provoked by colonial enfoldments.

It is also concerned with increasing the visibility of relevant African archaeological literature to scholars of colonialism and imperialism laboring in other fields.


Material Explorations in African Archaeology. Timothy Insoll. How people engaged with materials such as clay or stone, why people dug features such as pits, why they decorated their bodies, or treated their dead in certain ways, were all meaningful in the African past. However, these are subjects that have been generally neglected by archaeologists working in Africa until recently.

Material Explorations in African Archaeology examines materiality in African archaeology by exploring concepts of material agency and material engagement and entanglement in relation to their manifest presence in persons, animals, objects, substances, and contexts.

It investigates the magnificent and complex world of past African materiality by considering a range of case studies. These include, for example, why standing stones were erected, the potential meanings of bodily alteration practices such as scarification and dental modification, and why, recurrently, Africans in the past gave ritual importance to objects, materials, and locations thought of as exotic or different.

Adopting a multidisciplinary focus, the volume draws not only on archaeology but also, among other areas, ethnography and history, discussing themes such as bodies, landscape, healing and medicine, and divination, as well as concepts such as memory and biography, transformation, and metaphor and metonym.

Graham Connah. In this book, Graham Connah offers an overview of archaeological authorship: its diversity, its challenges, and its methodology. Based on his own experiences, he presents his personal views about the task of writing about archaeology. The book is not intended to be a technical manual. Instead, Connah aims to encourage archaeologists who write about their subject to think about the process of writing.

He writes with the beginning author in mind, but the book will be of interest to all archaeologists who plan to publish their work. Connah's overall premise is that those who write about archaeology need to be less concerned with content and more concerned with how they present it. It is not enough to be a good archaeologist. One must also become a good writer and be able to communicate effectively. Archaeology, he argues, is above all a literary discipline. Bryan Sykes.